Princesses from all around the world are coming to Prague. MISS PRINCESS OF THE WORLD started to get ready for the final gala evening 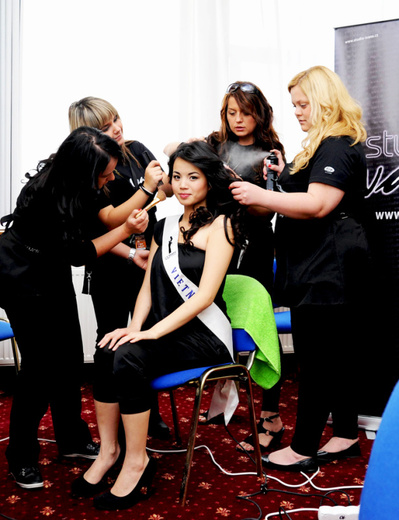 FInalists of the international contest MISS PRINCESS OF THE WORLD started to arrive yesterday to Prague. The peak of the contest is going to be the final gala evening at TOP HOTEL Praha on October 1st 2011 at 8pm. Fourty four girls from all around the world, aged 16-23 years are going to take part of the contest.  In the following days the girls are going to get ready for the final of the contest. Video cards are being done, free disciplines and choreography are being practiced. In the following days the program of the princesses‘ will include things such as a visit to the Prague Castle, the palace of hop and beer in Žatec, New Castlle Jimlín furthermore a graceful ride on Segways at Staroměstské náměstí.

The official inauguration of the contest MISS PRINCESS OF THE WORLD is going to take place at TOP HOTEL Praha, tomorrow October 23rd 2011 at 9pm. The president of the contest is going to welcome all the finalists with the presence of journalists, while having a drink at the Moravia restaurant.
„I am glad that the weather cleared out. I also hope it will last this way, because the program prepared for the girls requires warm and sunny weather. At this time I can say that the organization team is functioning and dealing with all the details such as girl’s arrivals, visa requirements, health conditions of the girls, etc“. Said the president of the contest ing. Viktor Krča and consequently expressed his delight. „We have confirmed the satellite transmission to whole Europe, Asia and Africa and also on-line internet transmission. Good news is that big countries such as China are sending their representatives from embassies and their media.“

Girls from the following countries are already accredited at TOP HOTEL Praha: Belgium, Czech Republic, France, Cyprus, Hungary, Lithuania, Malta, Mexico, Nicaragua, Portugal, Greece, Slovakia and Vietnam. The first reactions from the girls are very positive they are delighted with the accomodation, specially about the big bathing tubs and the team that is professionally taking care of them. They were also very impressed by the main hall, where they saw huge photographs of celebrities like Karel Gott or Iva Kubelková. It took the girls two months to get ready for the contest and to prepare their free discipline. Other preparations were done at the hairdressers‘, make up and the fitness centre. The princesses‘ brought along five pairs of shoes and 10 own evening gowns, including the national costume. The Czech finalist has her national costume in the colors of the czech flag, on which we can also find the czech national symbol. The dress was made by the designer Marie Zelená. The national costume of the Slovak finalist was made by the designer Jana Pištějová.