On Saturday June 24, 2017 area GOLF PARK LHOTKA alived with lots of children and guests. The whole event, the organizers produced as activity for children from children’s homes, together with our advertising partners, and other guests, including the current Miss Princess of the World Czech Republic 2016, Mirka Pikolová.

This event has been prepared by the organizational team of MISS PRINCESS OF THE WORLD, together with our partners - GOLF PARK LHOTKA, GOLF ACADEMY OSTRAVA, GOLF PRO VŠECHNY CZ, and PROMOTION AGENCY, under the auspices of the Municipal District of LHOTKA, led by Mayor Josef Šrámek ... this is how the presenter, Karel Procházka, started, together with the excellent violinist Ilona Stryová and the president of the pageant, Ing. Viktor Krča, a beautiful event at the new golf practise area.

Previously, it was an overgrown place that the local golf enthusiast, Mr. Petr Konečný, the executive of GOLF PARK LHOTKA, transformed into a pleasant place where sports enthusiasts and families can spend the whole day. Driving range, chipping green, putting green, adventure golf. Terms that are well known to golf fans. For other, there is an extensive driving range with 34 stations on two ramps, a space for practicing short drives from sand bunkers to putting greens, a nine-hole putting green, but also mini-golf with natural obstacles that is suitable for children as well. All this, together with the café, are offered by the new LHOTKA practise area.

When Lhotka is mentioned, everyone recalls some small village somewhere far beyond the hills. This time, however, we found ourselves in one of the city districts of Ostrava, which has a rich history. It was probably established during the peak colonization at the turn of the 13th and 14th centuries, as its name suggests. The first colonists of this village received advantages from their owner in the form of “lhot”. The first documented report of its existence is from 1464 (“pod Lhotkou podle Odri”), when its owner, Štěpán Střela of Chechl, had a border dispute with the neighbouring owner of Přívoz, Václav Felkl of Čochtendorf, about the pastures between the old and the new Odra river beds. In the years 1542 - 1629, the owners of the estate were the Bruntáls from Vrbno, in the years 1629 - 1727 the Gašins from Gašína. Afterwards, it quickly passed through several owners. The border disputes between the owners of Lhotka and neighbouring Hošťálkovic with their neighbouring owners as a result of the changes in the Odra river bed during frequent floods continued throughout the 16th and 17th centuries. In 1561, it even had to be solved by the royal commission sent here. The commission decided that the border between Moravian Ostrava and Lhotka with Hošťálkovice should be the new stream of the Odra River. The Lhotka population was exclusively engaged in agriculture until the beginning of the 19th century. An important intervention in the life of the peaceful agricultural village was the finding of coal in neighbouring Petřkovice and Koblova, and its intensive extraction from 1782 onwards. Lhotka gradually became a typical suburban village, where the majority of the population found employment in mines and industry outside their place of residence. The village was liberated by the Red army during the Second World War. It was annexed to Ostrava in April 1976, on the 24th day of this month.

It is now June 2017, and also the 24th day of the month, and our area is alive with lots of children and guests. The whole event, PRINCESS GOLF ACADEMY 2017, was organized at this beautiful green location as another year’s activity for children from children’s homes, charities, and leisure centres, together with our advertising partners, their family members, and other guests, including the current Miss Princess of the World Czech Republic 2016, Mirka Pikolová.

Everyone could then try golf, outdoor disciplines, and entertaining competitions, ranging from the longest or most accurate drive, puttting, chipping, adventure golf, electric bull rodeo, riding, and archery. Outside of the competition, therefore, special prizes for the funny public multi-event discipline were received by two of the favourite “uncles”" - Messers Martin Holčapek (Radkov Children’s Home) and Zdeněk Dörrer (Melč Children’s Home).

For the correctness of all the events during the day, they were supervised by golf trainers - Messers Ondřej Čáp, Adam Macháč, Vojtěch Antoš, Ondřej Chlebiš and Jiří Blažek. To the great cheers of the audience, the best children’s prizes, diplomas, and trophies in the individual categories were won by - René Macko (Karviná Children’s Home), Jan Holzbauer (Melč Children’s Home), Lukáš Wontroba (Melč Children’s Home) and Martin Macko (Karviná Children’s Home). In closing, we would like to thank the following for their support, not only our year-round partners of the project, but also great thanks to the companies: REMARKPLAST COMPOUNDING, TOMFRUIT, THERM, ABC TAXES, ACOUSTIQUE QUALITY, REISTEN VINAŘSTVÍ, AUTO TOMAN, LUMO PLUS, OMLUX, GOLF PARK LHOTKA, GOLF ACADEMY OSTRAVA, GOLF PRO VŠECHNY CZ, HAVLÍK OPAL and also the Municipality District of LHOTKA and the Moravian-Silesian Region.

All of the participants enjoyed the event, and who knows, perhaps for some of them, a promising future golf career awaits them, or even just a beautiful day to remember. Let’s wish them luck, and we’ll see them again next time ...“HAVE A WONDERFUL GAME”. 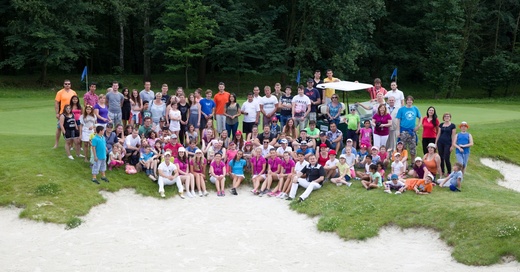