The picturesque Šilheřovice chateau was the setting for a beautiful sunny day, June 25th 2016, primarily for new, untraditional golfers who, in addition to the MISS, were primarily children from children’s homes, charities, and low threshold centres (Čeladná children’s home, Úsměv children’s home in Silesian Ostrava, Frýdek-Místek children’s home, CVČ in the direction of the Ostrava- Bělský les, CHS Michala Magone in Ostrava).

Organisers of the transnational project Miss Princess of the World, together with its partners the ROTHSCHILD GOLF CLUB and the PARK GOLF CLUB ŠILHEŘOVICE organised another attractive sporty fun charity event, called the PRINCESS GOLF ACADEMY 2016. The aim of the event, organised in one of the oldest and most romantic of golf courses in the Czech Republic, was to enable the children and guests to learn to navigate in a golf environment, put themselves in a good golf atmosphere, and to get to know the basic rules of golf. Under the supervision and guidance of coaches (Mgr. Věra Jirešová, Ing. Ondra Chlebiš, Hana Maixnerová, Adam Macháč and Vojtěch Antoš) all of the Academy participants had the opportunity to learn the beginnings of the game of golf.

The course is located in the village of Šilheřovice, 15 km North of Ostrava, in the magical environment of the park with the dominant Rothschild chateau. As a European cultural monument included in the Natura 2000 collection, there is a palace park here, which was founded by Friedrich of Eichendorf, which then the next owners (the Rothschilds) modified. In rare symbiosis, magnificent centuries-old oaks, ash trees, lindens, and rare trees from around the world provide shade, and are combined with a golf course founded in 1970 by Ing. Jan Cieslar. However, participants can benefit from both the official 18-hole golf course, and a 9-hole golf academy.

The organisers prepared everything, and ensured not only the transport of participants and sports activities with prizes, but as a gift for new golfers, they also prepared for them golf apparel and VIP golf catering.

Immediately after the official opening with the moderator Josef Bittala and the course marshall Miroslav Tošer there was a great warm-up before the arduous golf swing, and the kids did not miss the adrenalin activities prepared for them. Then came time for the fundamentals of the game of golf within the PRINCESS GOLF ACADEMY 2016. For those who held golf clubs for the first time, it certainly was not as easy as it seems, some driving, chipping, and putting, … .

All the children wished for nice weather, so even the sun decided to shine brightly on the small golfers, apparently to make it easier to see the balls. However, so that it was not too hot, the children and this year’s MISS made sure to stick to a proper drinking regime, and there was a special golf cart with lovely service staff.

Because golf is just a sport, it is necessary to replenish calories. The hunting lodge was therefore prepared with complete VIP catering and ZLÍN bartenders showed their skills, and all this time mostly mixed fruit cocktails. Also, so that everyone enjoyed the food and played well, an accordionist played a specifically composed song for the golfers of this tournament.

In the afternoon, the going got tough, everyone on the 9-hole took part in the official golf tournament with the canon start method. It is true that professional golfers would perhaps marvel at the style of some of our players, but golf is still a sport for gentlemen, and nobody can object to the weaker players. Even such players as Rory Mc Ilroy and Tiger Woods know that every beginning is difficult, so ... have a nice game!!!

The battle was fought, the results counted, and all that remained was the closing ceremony. On the red carpet and stairs of Šilheřovice chateau, which rises in the middle of the course, all of the golfers drank a glass of champagne (non-alcoholic today), and then there was the coveted announcement and presentation of awards. Together with the candidate for senator, Mr. Ing. Bc. Josef Pravda, then the president of the competition, Ing. Viktor Krča, not only gave prizes to the best players, but also gifts to all the children, so that nobody went home empty handed.

In closing, it must be said that the event was a great success, the children, MISS, and guests could enjoy the day as golfers with VIP service, and will certainly remember a a day full of experiences. Who knows, maybe one day, some of them will be the world’s golfing greats. We certainly hope so. So until next time, bye for now… 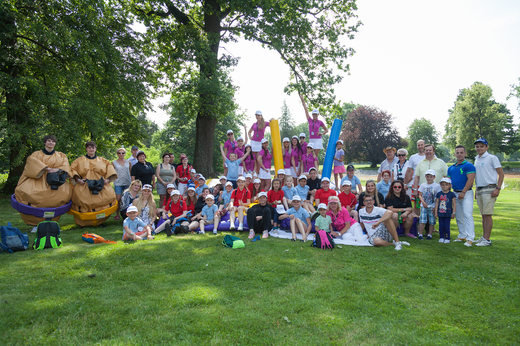