During the evening of May 16th, 2018, the romantic room with canopy bed in the luxurious Prague hotel Smetana (historic Pachtův Palace) was unfortunately still empty. Thanks to the strike of the airport staff, the world champion, Miss Dajana Laketic, had to stay in Brussels on her way from Malta, and arrived in the Czech capital in the morning. Thanks to the professional BMW limousine driver from Kopecký s.r.o., she could join the PRINCESS BOND GIRLS PRAGUE 2018 event with only a small delay.

At this event, under the auspices of the Mayor of Prague 1, Ing. Oldřich Lomecký’s meeting with guests and the media in Prague, and the surroundings welcomed a number of beautiful girls as part of the informal opening of the new World Final of MISS PRINCESS OF THE WORLD 2018-2019.

The morning was spent with challenging tasks at TEPfactor, a competition inspired by the Castle Boyard TV show. Under the supervision of Ing. Lucie Chalupecká, head of the Slapy-Chotilsko area, 5-member teams of MISS competitors and partners, together with the pirate Veronika, transferred to the world of adrenaline entertainment.

After lunch, it was time for the second part, a demonstration of weapons and defensive products, accompanied by training and shooting small arms in Čestlice. The Chief Instructor, Daniel Novák, shooting range manager, together with Ing. Pavel Chvalina from Česká zbrojovka, were pleasantly surprised by the performances of the girls, most of whom had never held a pistol in their hands before. Due to the adrenaline experience and the ban on alcohol at the shooting range, the guests also appreciated the tasting of the non-alcoholic Revine wines from Vinselekt Michlovský.

In the final part of the event, on the basis of the motto “Beauty and Business”, the girls absolutely sparkled in the evening, in dresses from leading Czech designers, Luděk Hanák and Jiřina Tauchmanová. With the participation of world and Czech MISS competitors and models, promoters of the project from the ranks of advertising partners, ambassadors, and official guests, the social part took place during the cruise on the Vltava river on the boat NATAL. The Prague Dixieland music programme was complemented by DJ Pája and two fashion shows (the FLOW collection by Luděk Hanák, and GLAMOUR by Jiřina Tauchmanová), along with interviews and filming with world champion Dajana Laketic. During the trip, Janek Vajčner of KOSTKA - kolobka s.r.o. officially handed over a special KOSTKA scooter. More than a hundred guests, along with the Italian Ambassador (H.E. Aldo Amati), the Ambassador of Pakistan (H.E. Dr. Israr Hussain), and the envoy of Mexico (Mr. Miguel Angel Vilchis), during the banquet, besides the meal, could taste selected wines from Reisten Vineyards, Havlík Opal, Lobkowitz beer from Redfood, Golden Water from TEFCO CZ, a.s., or the excellent, handmade Andělské pralinky (Angel chocolates) from Martina Brandová.

Thanks to the physical fitness, teamwork, concentration, and intelligence, the trophies and prizes from Acoustique Quality were awarded to the winning team of girls, including Kateřina Malá, Natálie Stejskalová, Michaela Buchtová, Natálie Mandátová, and Adéla Kašpaříková. The best scoring shooters were evaluated as being Miss Vendula Konečná and Martin Vodička. Due to the good weather, the beautiful scenery of the Prague night, excellent food, and good entertainment, none of the guests wanted to leave the boat until long after arriving back at the quay.

The next day, another programme awaited the world champion, Dajana Laketic. In the morning, top pilot Michal Raudensky showed almost all of Central Bohemia, as well as the incredible manoeuvrability of the Robinson helicopter at Sazená airport. Also unforgettable was the history of the Lobkowitz family during a special VIP tour of Nelahozeves Castle, and the afternoon tour of Prague, including Žižkov television transmitter, Petřín, and the shopping centre when visiting the Fashion Arena. With arms full of gifts, the world champion flew from the Czech Republic on Saturday morning.

We can honestly say that the guests truly enjoyed the event, the girls learned some new skills, and the Miss Princess of the World won over several potential new adepts to win the crown or the next title. It should be stressed that the girls have to meet very strict criteria, and are not just models or hostesses. The organizers arrange themed events on a regular basis. “The perfect MISS PRINCESS OF THE WORLD should be able to behave, defend, and represent. In physically and mentally challenging situations, as well as in dresses and on boats or on the catwalk and during social gatherings”, said Ing. Viktor Krča, President of the competition. 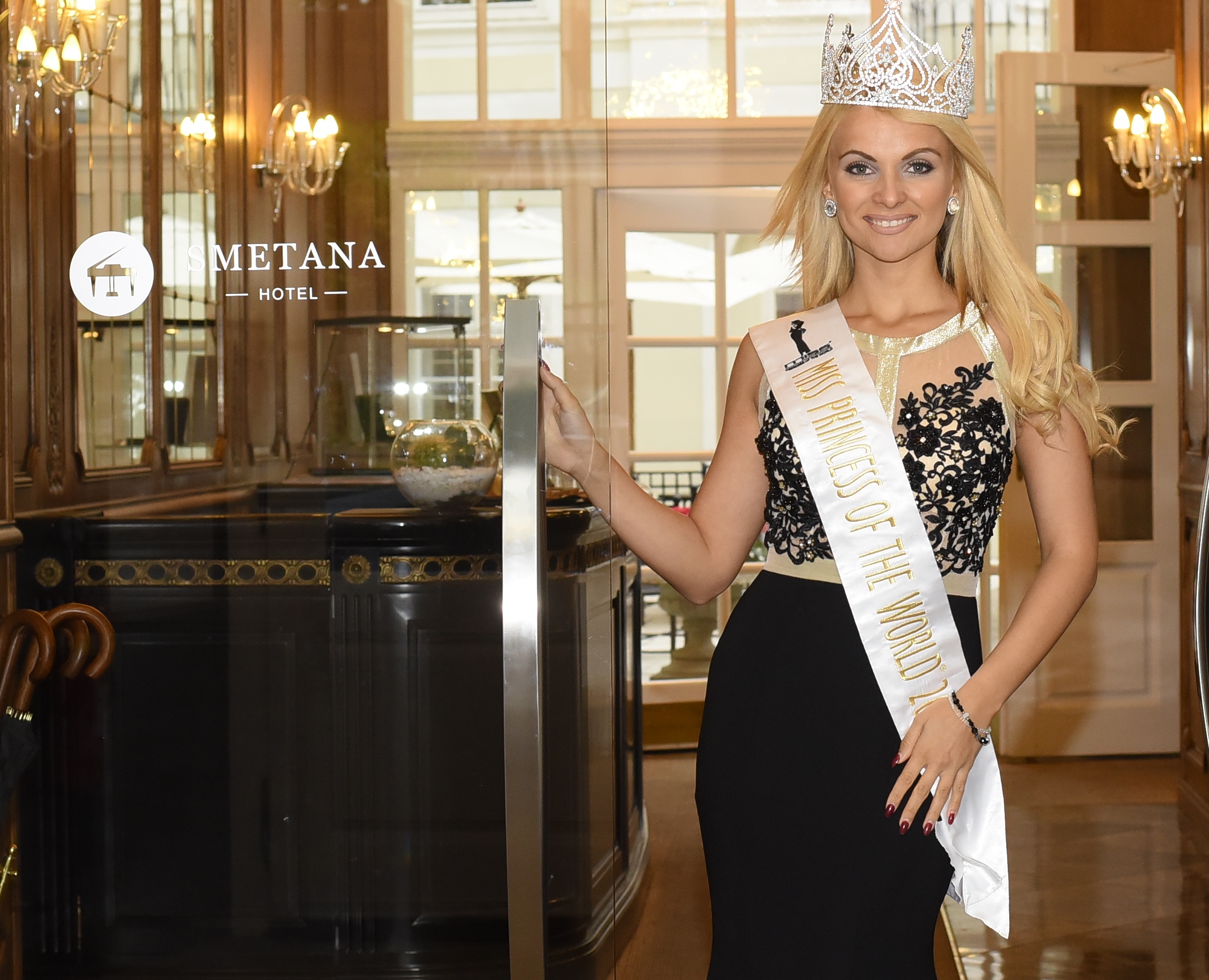