Miss Princess of the World – on the snow

The second promotion, sport and entertainment part called Miss on the snow, took place on 8th -9thFebruary, 2013 in the skiing area of Kněžický vrch in Krkonoše. This entertaining show prepared for the participants and partners is held every year to informally begin the new season of the contest. This time the contestants could compete both in traditional or unusual winter sport disciplines (slalom skiing, all-terrain vehicles, snowshoeing, bungee running, paintball, sumo, mechanical bull riding etc.).

One of the highlights of the day was the performance of Ladislav Šín, the world champion master in operating the whip in whip and colt western show. The founder of cowboy contests in whip cracking, lassoing, knife and tomahawk throwing and controlling western revolver performed the whip catching discipline on the beautiful girls.

After the announcement of the winners, the organizers distributed the certificates among the competitors and started the free fun evening and dancing. The participants spent the next morning on the ski slopes and in the afternoon they left for their homes full of excitement and experience. 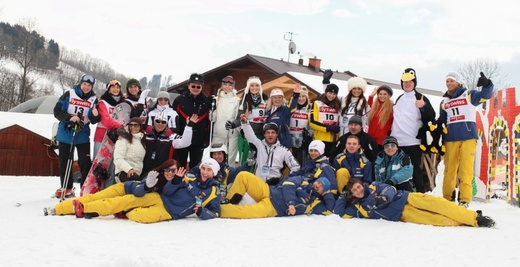