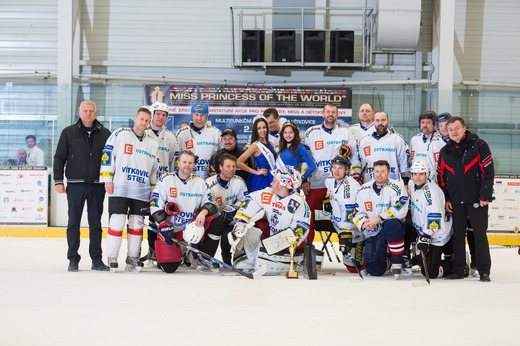 On March 2, 2017, the Multifunctional Hall in Ostrava-Vítkovice came alive with three hundred participants of the attractive sports entertainment charity event for children from children’s homes, low threshold facilities and leisure centres of the Moravian-Silesian Region, called MISS ON ICE 2017 and the PRINCESS HOCKEY CUP 2017. This event, has earned fame thanks to its interesting programme. The visitors were charmed by our most beautiful girls from MISS PRINCESS OF THE WORLD Czech Republic 2016 Mirka PIKOLOVÁ from Prague and the II. VICEMISS, Julie HOJDYSZOVÁ from Frýdek-Místek. To guests showed figure skating performance by the junior silver medallist of the Czech Republic, ANETA JANICZKOVÁ, and multiple champion of the Czech Republic, JAN KURNÍK. At the end of the event, the audience could see an exhibition hockey game for the PRINCESS HOCKEY CUP 2017 trophy, between the teams EUROMASTERS and FRIENDS, and with the participation of former NHL hockey players.
The fact that everyone enjoyed this beautiful day could be seen on the faces of all of the participants as they left.