An attractive, dynamic, and entertaining sports charity afternoon was witnessed on March 3, 2016 in the multifunctional hall in Ostrava-Vítkovice. As part of the long-term international project, Miss Princess of the World, the organizers of this global contest organized another year of sporting events under the title of MISS ON ICE, with this year’s novelty, the first annual ice hockey tournament, PRINCESS HOCKEY CUP 2016.

The afternoon-long programme was properly primed and alternated in quick succession, under the watchful eyes of professional referees and organizers. On the ice, in addition to the presenters - Jirka Basta and Tomáš Hanzl, excellently co-operating organizations were involved, primarily for entertainment - Ostrava skating club and HC Vítkovice Steel.

At the invitation of the organizers of the programme, lots of games and competitions of skill took place, as well as the MISS contest, players, guests, and their family members participated, especially children’s homess and other low threshold facilities, clubs, and charities that work with youth. Because many of these children did not have skates, thanks to the foresight of the organizers, together with the company REMARKPLAST, some rentals were provided, and 40 pairs of skates were even brought from Prague. After initiating the necessary actions and performances, personalities, the perfectly prepared ice rink figure skating exhibition opening Cremony took place, in which promising young skatem and future representatives, Lucie Popková, Vojtěch Warisch, and Emma Vrublová were introduced. The conclusion of the event once again showcased a parade of jumps and a technical commentary.

Next came precisely what the children and guests were really looking forward to. Quickly putting on skates, and through the open gate, and on to the ice rink for skating, hockey, and dance skills.

For some skatem, it was a real challenge to stay on the ice, but for others, handling the puck, and for the better of them, beating the goalkeeper, so basically everyone attacked the ice in their own way. Our very own MISS PRINCESS contestants wer also on the ice with them the whole time, and like true white angels, handl out sweets and gifts to the children.

Because we know that after skating and such a great effort to overcome gravity on the ice, people get hungry, so in co-operation with Restaurant PULS and our partners Tom Fruit CZ, Starbucks, Havlík Opal, and Raisten, we prepared booths with catering, where there was certainly plenty to choose from for both children and adults alike. Such as non-alcoholic punch, hot dogs, fruit salad, and venison goulash, which was really delicious.

In the next part of the event, spectators could watch and cheer on the first annual hockey tournament for amateur players, namedthe PRINCESS HOCKEY CUP 2016. After the official draw of the teams, they played against each other.

At the end of the tournament, an attractive spectators discipline of the best shooters took place, and spectators could be inspired by the amount of individual movesof the victorious hockey player.

The whole event ended with the formal announcement of the best teams, and the official handover of the cup and prizes from the companies LIBROS, ČEDOK and BAUER.

All of today’s event, MISS ON ICE 2016, was enjoyed by all of the participants to the utmost. On the faces of the children we could see a lot of joy. And after the end of the event, there was the posibility to take home a gift bag, so who would not like that? So let’s keep our fingers crossed for the organizers, hoping that this year’s event was definitely not the last, and for them to prepare other ways to make children happy, and allow them to have fun with sports. 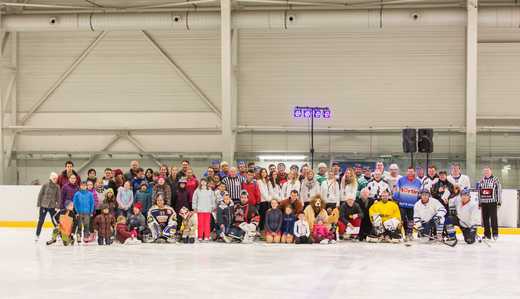