GALAEVENING OF ECONOMIC DIPLOMACY WITH NATIONAL SELECTION OF CZECH FINALIST 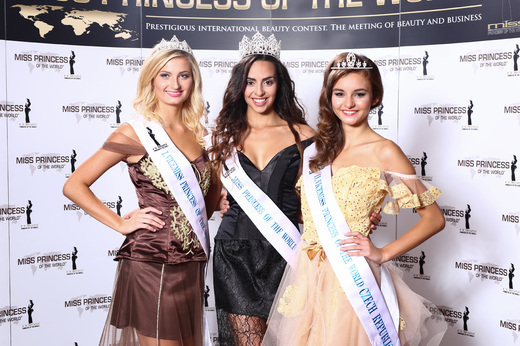 On October 14, 2016,  GALAEVENING OF ECONOMIC DIPLOMACY WITH NATIONAL SELECTION OF CZECH FINALIST 2016 took place in Prague Marriott Hotel. Czech delegate who shall represent the Czech Republic at a world beauty and communication skills contest MISS PRINCESS OF THE WORLD®  2017 was selected there.

Motto - The meeting of beauty and business – was the motto of the whole MISS PRINCESS OF THE WORLD® project as well as the program of the evening organized for partners and official guests along a social dinner served at round tables. The event was held under the patronage of PaedDr. Hynek Kmoníček, director of the foreign section of the Office of the President of the Czech Republic, Czech Chamber of Commerce, League for Tourism and in cooperation with BuildingBridges business platform. Dr.  Jiří Hansl, director of the foreign department of Czech Chamber of Commerce, greeted the guests.

As Miss Princess of the World is the only world contest whose organizer comes from the Czech Republic and it has the honour of long lasting support from the side of participating countries, the invitation to take part in the event accepted H.E. Mrs. Souryia Otmani, Ambassador of Kingdom of Marocco, H.E. Mr. Aldo Amati, Ambassador of Italy, H.E. Dr. Merouane Shafiyev, Ambassador of Azerbaijan, H.E. Mr. Valery Kurdyukov, Ambassador of Belarus and other foreign guests of honour. Longlasting cooperation with state administration and embassies is a proof of seriousness of the project as a whole.

The event was moderated by Mr. Raynold Koranteng, MISS presented the designs of leading Czech fashion designers Jiřina Tauchmanová, Luděk Hanák and Jitka Stauder, swimsuits were provided by company APOLI and the participants had a chance to enjoy the music of L.A.Sunday with a singer Tereza Polk, music legend Felix Slováček, Hanna Pekhart, dance performance by JM DANCE of Michaela Haladová and Jiří Gross, and double European champions in electric boogie - The Others. The beaty of the participating girls was underlined by hair stylists of Ivana Studio of Mrs. Ivana Korduliak Doležalová and Visage Studio of Mrs. Hana Pekhart.

Beautiful crystal crown for the winner was produced by the PRECIOSA company.

In cooperation with MSC Cruises, the unique world finals of MISS PRINCESS OF THE WORLD 2017 to be held on the brand new ocean cruiser MSC MERAVIGLIA was presented during the evening. The BUSINESS FORUM of economic diplomacy 2017 will be its very special accompanying activity.