On October 14th 2016, in the luxurious premises of the Prague Marriott Hotel, the prestigious VIP GALAEVENING OF ECONOMIC DIPLOMACY 2016 will take place, along with the national selection of finalists for the Czech Republic for MISS PRINCESS OF THE WORLD®2016.

This event, taking place under the auspices of PaedDr. Hynek Kmoníček (Doctor of Pedagogy), director of the Foreign Office of the President of the Republic, is conceived as a social VIP gala evening, with an official dinner attended by project supporters from the ranks of advertising partners, official figures, ambassadors, invited guests, and the media.

The gala evening precedes nationwide casting with a highly selective professional jury for the Czech finalists, and where another official jury at the gala programme will select the best of the superfinalists to represent the Czech Republic in the global final of MISS PRINCESS OF THE WORLD® 2017.

A musical entertainment programme, compered by Reynolds Koranteng, together with a FASHION SHOW of leading Czech designers, will complement the presentation of competitors, top dancers, and artists. Part of the evening’s programme, however, is a gala dinner at round tables, along with tasting specialties. The event will be filmed by TV and special moments will be captured by photographers, profits from the large-format photographs with the winners in co-operation with CANON, and contributions from other partners, traditionally being donated to various charity projects within the framework of the social responsibility project of MISS PRINCESS OF THE WORLD®.

Within the framework of the event, and in co-operation with the worldwide shipping company MSC Crociere (MSC Cruises), the unique world final of MISS PRINCESS OF THE WORLD® 2017 will be presented with the participation of approximately 60 officially represented countries, prepared under the auspices of cultural and political leaders as a highly prestigious event with international participation, in the less traditional environment of the brand new, giant, ocean-going luxury ship, the MSC MERAVIGLIA.

The event includes a rich accompanying programme (exclusive performances, world virtuosos, the Cirque de Soleil, etc.), which will be filmed for TV, and the subsequent satellite broadcasting for the whole of Europe, parts of Asia, and parts of Africa, as well as online broadcasts on the Internet throughout the world.

Accompanying activities, prepared in co-operation with the consulting platform BUILDING BRIDGES, will include BUSINESS FORUM OF ECONOMIC DIPLOMACY 2017 on the occasion of the World Final of MISS PRINCESS OF THE WORLD® 2017, associated with workshops and the participation of international partners and official representatives, prepared in co-operation with honorary consulates and chambers of commerce in individual countries. 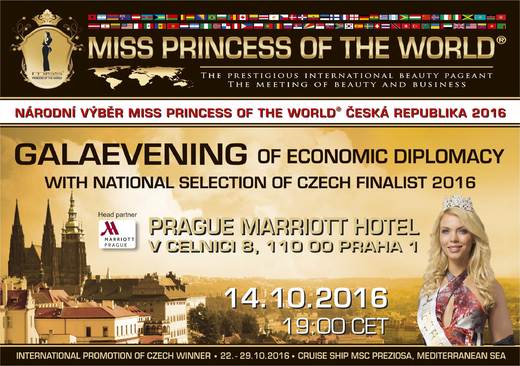