The princesses had the chance to be part of a tour of a medieval mine and also to make turn with their own hands a medieval mining machine. The girl were guided by Mr. Vojtěch Voros, who enlightened the girls into the history of this famous Down: „ Kutná Hora is inherently connected  with the extraction of silver since the begining of the 13th century. This place was very aktive in the extraction. Almost all undeergrounds of Kutna Hora are excavated, we are talking of about 100km of corridors“.

The young princesses visited the well known north bohemian town of Kutná Hora on their first day of promotion from the acompannying program of Miss Princes sof the World. It would be hard to find a town with a bigger mining history. The on going St. Weceslas feasts were the ideal place for the finalists to appeal for the first time in front of the wide public.

Our finalists of  Miss Princess of the World were welcomed by fanfares upon their arrival. After a pleasant short promenade they were headed to a nice cafe. The opening speech was done by the meyor of the city RNDr. Ivo Šanc, CSc., who had official auspice over this event in this year. „ It is really a big concentration of beauty and I am very glad that the finalists of Miss Princess of the World are here in Kutná Hora“, he said. 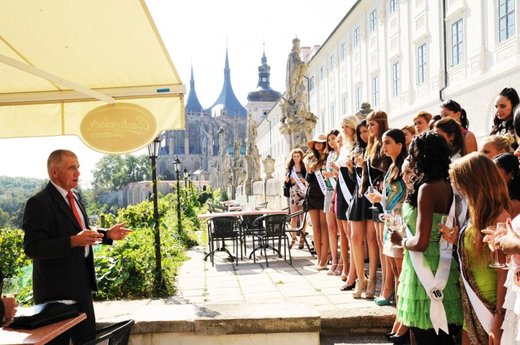 After a short break in a picturesque cafe, with an impressive view to the majestic temple of Saint Barbara. All 43 princesses of the world got carried away by the pure beauty of the czech medieval architecture. Their tour guide  Zdena
Sosnovcová introduced the finalists briefly with the history of this beautiful monument, which is included in the UNESCO world heritage list: „Saint Barbara is the patron of pitmans and Kutná Hora was a very rich city due to silver extraction. This temple was not constructed upon a religious institution, but upon the wish of the citizens.
According to Cannon Law it was innitially a chaple,  eventhough it could architectonically compete with the Prague cathedral.“

The princesses were welcomed by a very loud applause by the people in Kutna Hora at the St. Wenceslas feasts. The girls were introduced on stage and their presence improved the already very festive people in Kutna Hora. After the end of the promo event a very pleasant dinner took place in a medieval czech restaurant, where the finalists had the chance of tasting some specialities. 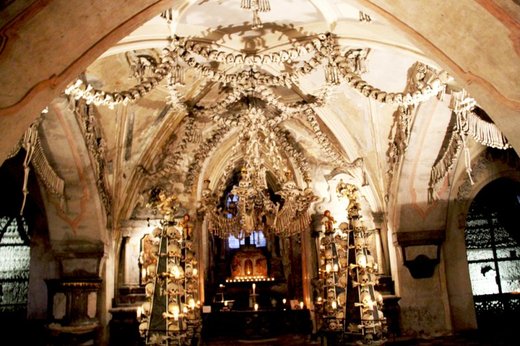 he last point of the program was in the spirit of  Memento Mori. The princesses visited the  chaple  of all saints and its charnel  house from the 14th century. After several epidemics we can find here resting  the bones of approximately fourty thousand people. The bones are aligned into  pyramids from skulls and cross bones. According to a legend this allignment was  started by a half blind monk.

Furthermore all decorations are made from real human bones, which is a world rarity.  A gloomy and silent place steeped with death left a deep impact on the girls and led them to think about  human mortality, in the spirit stated by their guide MichaelHoskovec: „This is a piety, Memento Mori. It reminds us that beauty is  transient and we will all, one day, end similarly. I assume that the people resting here, did live a good life and therefore according to catholic tradition they went to heaven.“