On their fourth day of promotion the finalists of Miss Princess of the World were guests at the headquarters of the company Delikomat. They were treated to a wide variety of coffee, chocolate, sweets and sandwiches. A short promotion and a photo shoot followed.

Delikomat provides for Miss Princes sof the World cofee machines and its respective fillings. Furthermore, together with the czech producer of mineral water Šumavský pramen they are providing the drinking regime. „ now a days it became a trend to drink coffee in order to enjoy it, not to calm sown Terst. That is why our machines use only Lavazza and Illy coffee in combination with mineral water in order to assure the desired quallity. 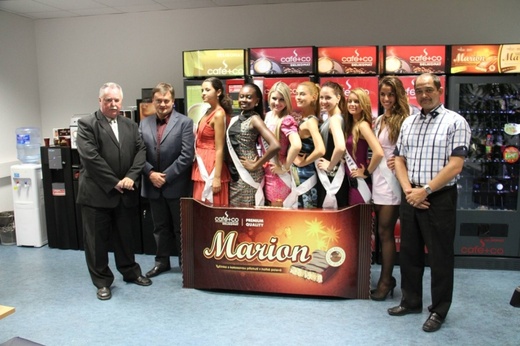 Delikomat has been on the czech market for 16 years, they have placed more than 15000 machines on the market and in this year they have reached a million czech crowns turnover. We dared to ask how much coffee have the Princesses drunk already: „ If I turn it into coffee portions, I can say that the girls already drunk 400-500 portions of coffee. „I personally had a bigger estimate, but I
suppose, that they have a nutrition regime they have to follow. However, if the consumption happens to raise, we are absolutely prepared.  It is enough if someone from production raises the phone and they will be assorted within 5 minuts. They can drink as much as they like!“