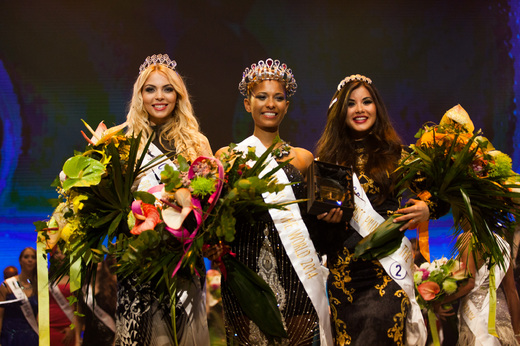 The world final of the beauty contest Miss Princess of the World 2014, held on Friday, October 10, 2014 at ČEZ Arena in Ostrava. Five dozen jurors chose the most beautiful “princess” of the world, Andella Chileshe Matthews from Zambia. The first runner-up was Monika Vaculíková, and second runner-up was Daiana Ayelen Arlettaz from Argentina. “I am happy, very happy indeed. The first thing I did after winning was call my mother in Zambia. I heard everyone cheering on the phone at home,” said the overjoyed winner. “I believe that this win will help Zambia, in that our country will become more visible. I’ve had a wonderful week in the Czech Republic. I was inspired by the castles, something we don’t have in my country. I was enthralled by Prague Castle and the Charles Bridge, and I touched the lucky place on one of the statues, which everyone else touched. It brought me luck,’ rejoiced Andella Chileshe Matthews.

“Secretly, I wanted to get into the top three, which I managed. It is a great success, the biggest in my career. I’m so glad that the finals were held in Ostrava, because my acquaintances and friends could come out to support me from my home town of Bruntál. It was very helpful,” beamed Monika Vaculíková.

“The winner has charisma, she is beautiful, and intelligent,”said the jury president of the contest, Ing. Viktor Krča. “The Miss Princess of the World contest is designed for girls aged 16 to 26, and is one of the top five most prestigious beauty contests in the world. This contest is different from other beauty contests because of the inclusion of disciplines in which girls demonstrate that they can manage to work with modern means of communication, and also that they are familiar with diplomatic protocol,” said Ing. Viktor Krča.

The Ostrava finale was accompanied by a series of charitable events. “During the afternoon Handbag fair, we collected 37,450 Czech crowns,” said the founder of the Lucky Star Foundation, Alena Skovajsová. At the after party, handbags of VIPs were auctioned off for CZK 17, 500. “These funds were received by the Lucky Star Foundation. The moneywill be used in the treatment of the mentally disabled six year old twins Vašík and Jaroušek of Ostrava. Their insurance company does not cover the therapy that is required, and their parents can not afford it,” said the president of the contest, Ing. Viktor Krča.